Types of printers and their differences

Menu
Relevant for:
Plus 1.75 mmMK2.5MK2.5SMK3MK3SMMU1MMU2SSL1CW1MINIMK2SMK3S+MINI+SL1S
Last updated a year ago
This article is also available in following languages:

3D printing is an automated additive manufacturing-process, where a 3D printer creates a physical model based on digital data (a 3D object). All types of 3D printing are based on the same principle: creating objects by adding layers on top of (or below) existing layers. As of this moment, there is no 3D printing technology that would be completely universal and suitable for every purpose. This is why it's important to decide how and for what purpose you are going to use the printer.

FDM is an acronym for Fused Deposition Modeling (trademark by Stratasys) and FFF stands for Fused Filament Fabrication (open source). It encompasses all 3D printers, which heat/melt polymers and push it through a nozzle/extruder/print head onto a platform, where the model is built. The material for printing is provided as filament spools of 1.75 mm or occasionally 2.85 mm in diameter. The differences in the types of printers out there lay in how the extruder and print platform move to create the models.

The biggest advantage of the Cartesian printers is how common they are. There are a lot of tips, tricks, and solutions for issues online. The parts for the printer can also be found easily.

On the downside, Cartesian printers, if used for faster prints, will have a lower quality of printing due to the weight of the axes. Also, usually, the printer volume is a lot larger than the build volume due to the movement of all of the axes. 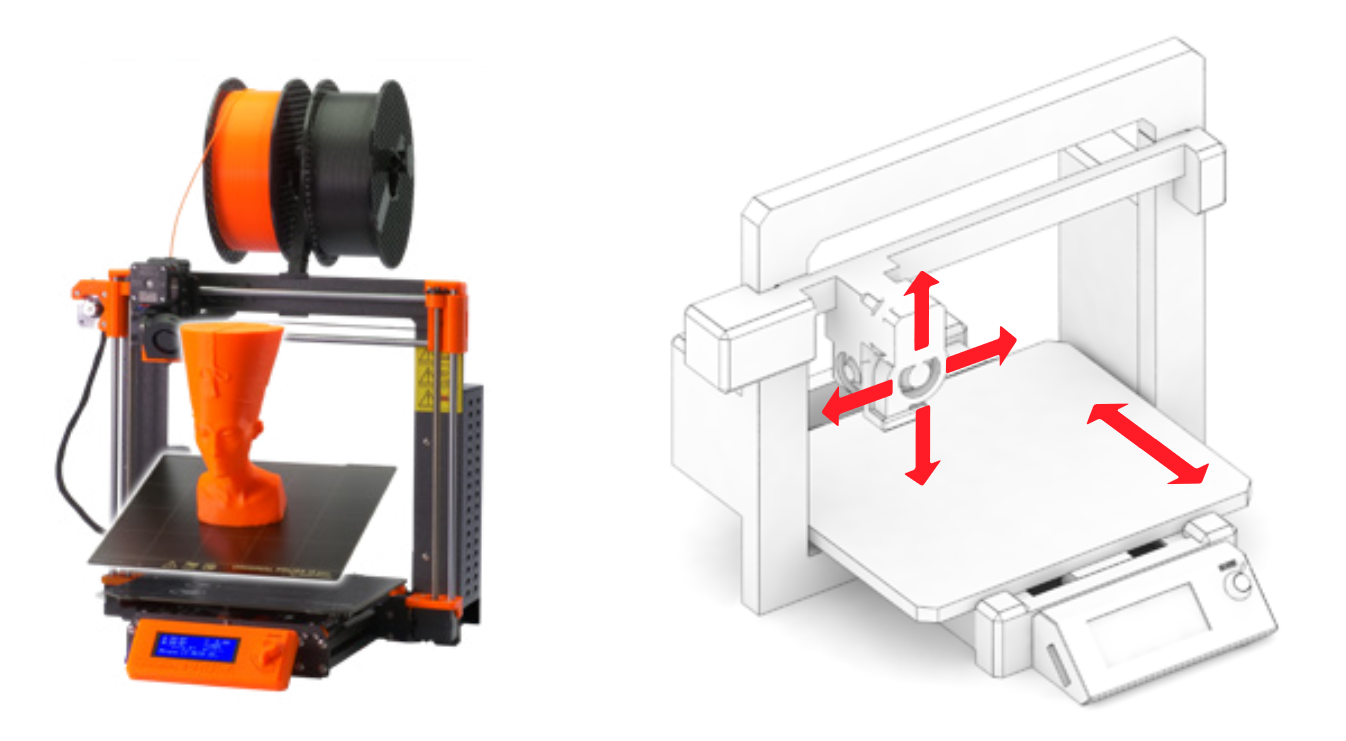 Like the Cartesian printers, the CoreXY design also has the latitudinal and longitudinal coordinates determined by two motors and timing belts on the Y- and X-axis, and the print height determined by the Z-axis. The difference of the Core XY is that the X and Y movement is dependent on each other, done by a very specific belt design. The print surface, in this case, will be lifted to meet the extruder. Note that not only the movable print surface makes a CoreXY printer. The defining trait for the printer type is the design of the XY-belts and their movement.

Since the X and Y axes are a lot lighter, faster prints will not have the artifacts that may appear on fast prints on Cartesian printers. The design also allows for a lot larger part of its overall volume to be the build-volume, since there is no need for the print surface to move sideways.

The belts used in CoreXY printers are a lot longer, which makes all belt issues bigger than with the Cartesian printers. Their complicated path also makes these issues harder to repair. The frame needs to be very stable and perfectly square, or else the dimensional accuracy will be smaller. 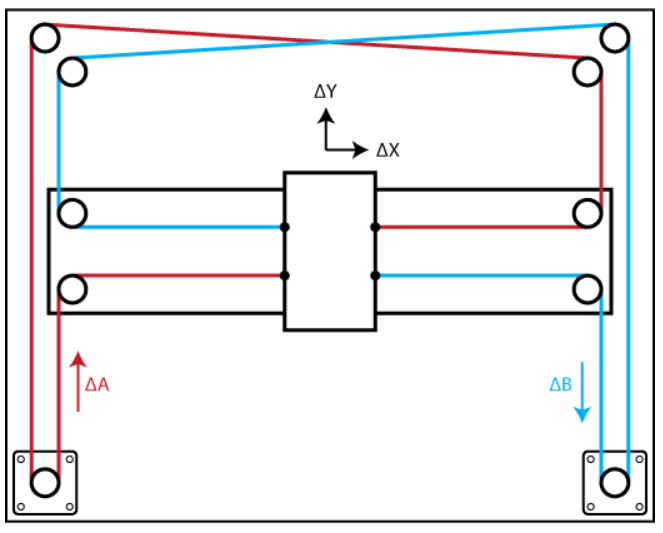 In Delta printers, the print surface stands still, and three motors work together to meet in the hotend and move it with the latitudinal and longitudinal coordinates, as well as the height of it. These motors control three posts, and these posts are connected to the extruder by arms that will move the hotend. The name of the printer style (delta = Δ) comes from the triangular shape which the arms holding the hotend form. This type of printer was designed to make faster prints.

The Delta printer extruder is very light. That combined with the 3 motors controlling it, makes this printer ideal for fast prints. This printer was an early adopter of the 32-bit system due to the complex calculation it takes to make the movements. Some of the attraction of the printer is also how cool it looks while it is working.

The Delta printers all have a relatively small and circular print surface. This limits the build-space significantly. The high speed of the printer makes the prints less precise. Also, it is uncommon to be used as a desktop printer, as any issues that the printer has can be extremely difficult to troubleshoot and fix, not only due to complex working and lack of information but the overall lack and cost of parts. The printer also needs to work with a Bowden extruder to make the extruder light, which can limit the number of filaments that can be used. 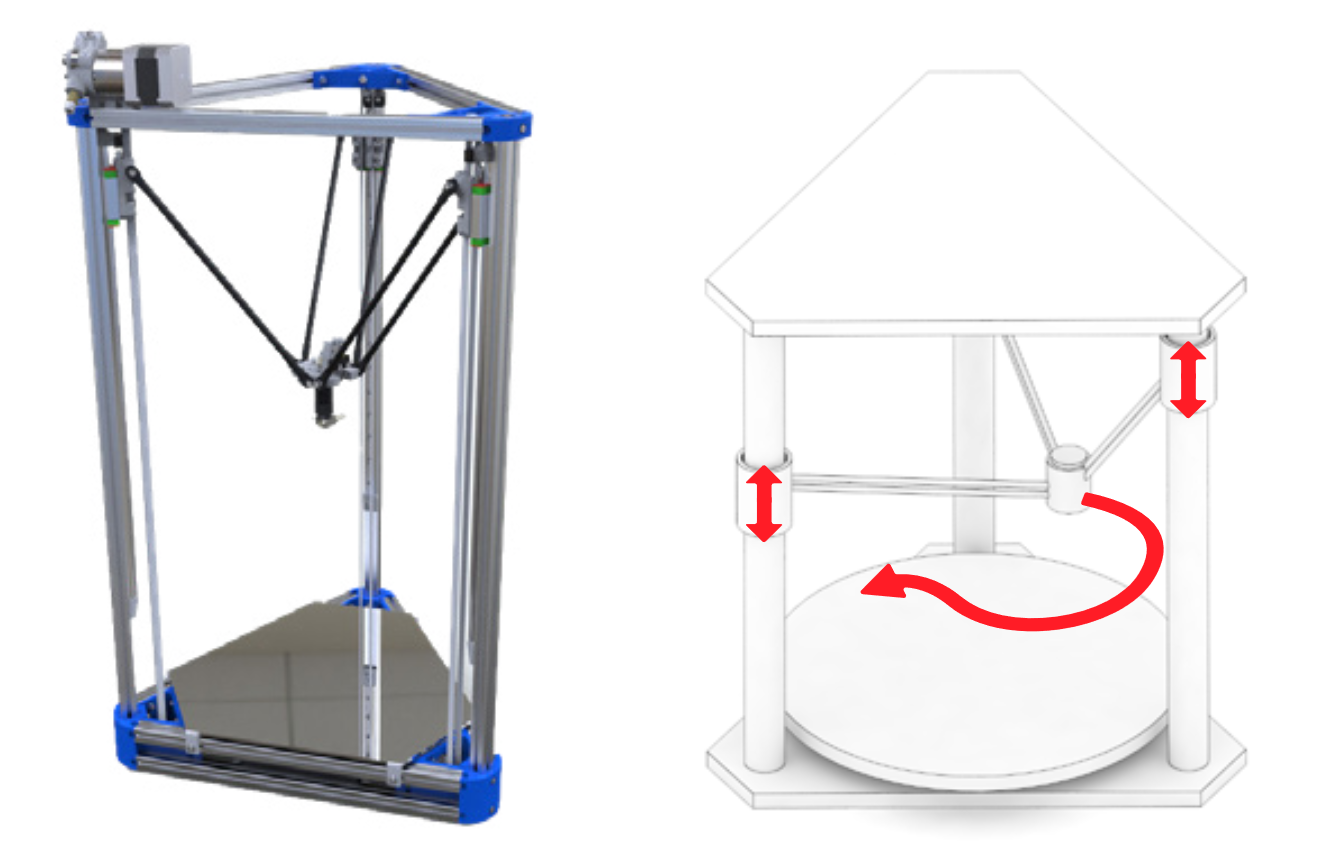 This printer uses the Polar coordinate system, which has the points on a circular grid instead of the square as the Cartesian system. The printing platform not only moves sideways but it also rotates. This allows the extruder to only move up and down, and also for a large build area. This printer has a very light frame.

This technology is still being developed. That makes the printer very expensive, and it makes parts and technical support hard to find when you have problems. 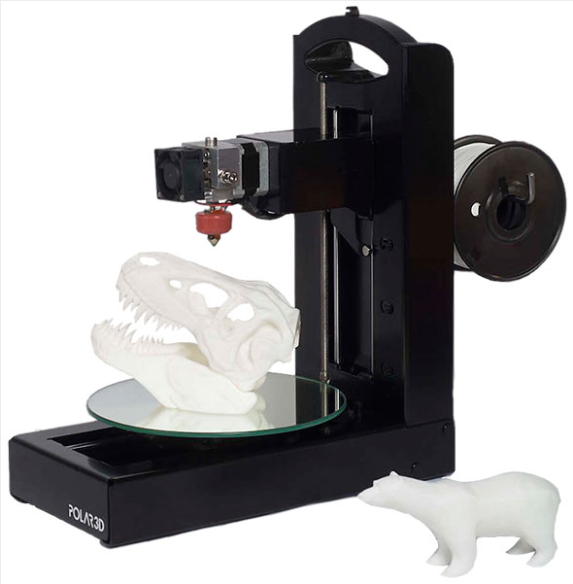 The basic principle of vat polymerization printing is that a vat containing photosensitive liquid (resin) is cured layer by layer, by a heat source to make the object.

Printed objects are almost perfectly smooth, incredibly detailed and layers are nearly invisible to the human eye, with the minimal layer height going from 25 – 100 microns. The biggest disadvantage of this technology can be a smaller print surface area and also the toxicity of liquid resins. You should try to prevent resins from touching your skin and avoid inhaling resin vapors.

Printed objects are not fit for immediate use after the print job finishes since they tend to be a bit soft and sticky - which is caused by the leftover unsolidified resin on the surface of the object. It is recommended to wash the object in isopropyl alcohol and to cure it further using UV light.

The Curing and Washing Machine (CW1) is an optional accessory for our Original Prusa SL1, which can wash, dry, and cure the print quickly and easily.

Each layer's shape is displayed as a semi-transparent mask on an LCD screen, and the exposure is performed employing a high-performance UV LED. UV light can pass only through white pixels on the display. Due to the fixed resolution of the LCD display, the printed objects have a fixed XY resolution. This method also cures a whole layer at a time, meaning it doesn’t matter how many objects there are on the printing platform.

Exposure is performed by a UV laser ray. The ray is controlled by two mirrors and it “draws” each layer gradually. The time required to solidify a single layer depends on the size of the area which needs to be solidified. Simply put, the more objects there are on the print platform, the longer the print takes.

The whole layer is solidified at once thanks to a digital projector. The areas that receive exposure from the projector are solidified. The advantage of this method is obvious - each layer is solidified in the same amount of time, no matter how many objects there are on the print platform.

Another type of 3D printing technology is SLS and DMLS, which use a process called sintering. Essentially, every time a new layer is printed, a cylinder spreads a thin layer of fine powder across the platform, which is then sintered with a laser into the required shape. When the print is finished, the whole object is covered with the printing powder. Due to how this method works, the printed objects must have holes, through which the excessive powder is poured out. Unsintered material can be reused for the next prints, which means that very little material is wasted. Another advantage is the fact that the layers are nearly invisible. These printers are not massively widespread among the common public. Due to their main use in various industries, the prices are noticeably higher - the cheapest machines start at around 6000 USD. 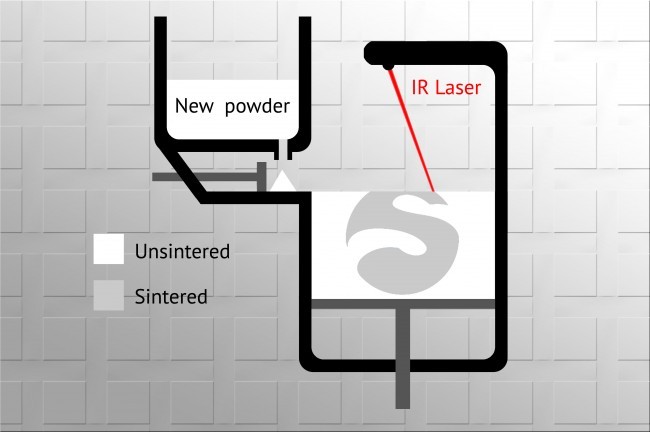 There are other types of technology and designs out there, like "Jetting" or concrete and metal printers, using various methods. Since those are mostly reserved for industrial applications due to price and patents, they are not included here.