Menu
Relevant for:
Plus 1.75 mmMK2.5MK2.5SMK3MK3SMINIMK3S+MINI+
Last updated a year ago
This article is also available in following languages:

Layer shifting is a printing issue, which causes the layers of the printed object to shift from their intended positions.  It is usually associated with an abnormal movement of the X-axis and/or the Y-axis, leading the extruder head to be misaligned mid-printing.

In order to troubleshoot the issue correctly, it is crucial to recognize in which axis did the layers shift. See the three photos below demonstrating three different kinds of layer shifts. Troubleshooting itself is the same for both axes.

Layer-shifts are most often caused by the wrong tension of the belts or pulleys not being secure. 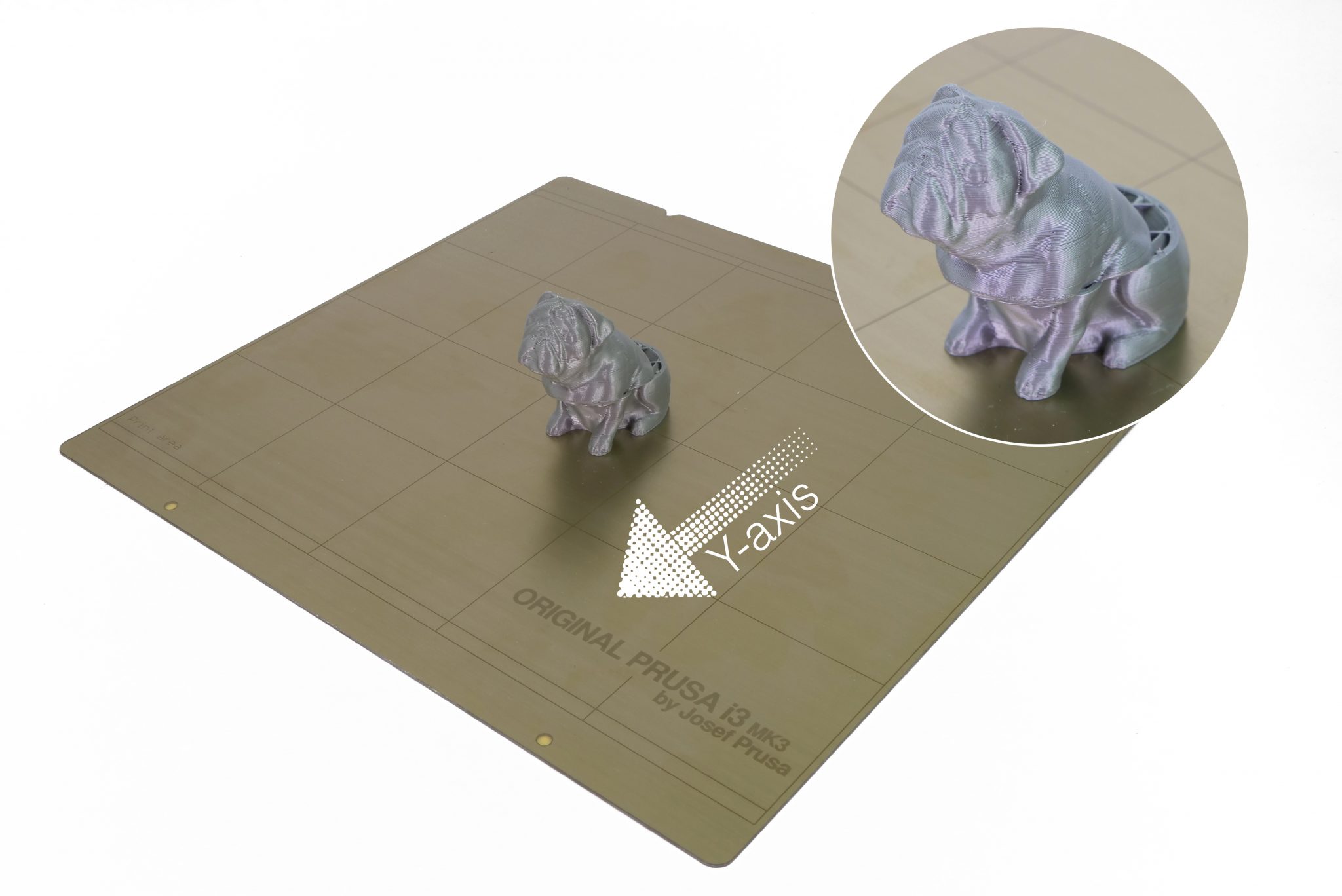 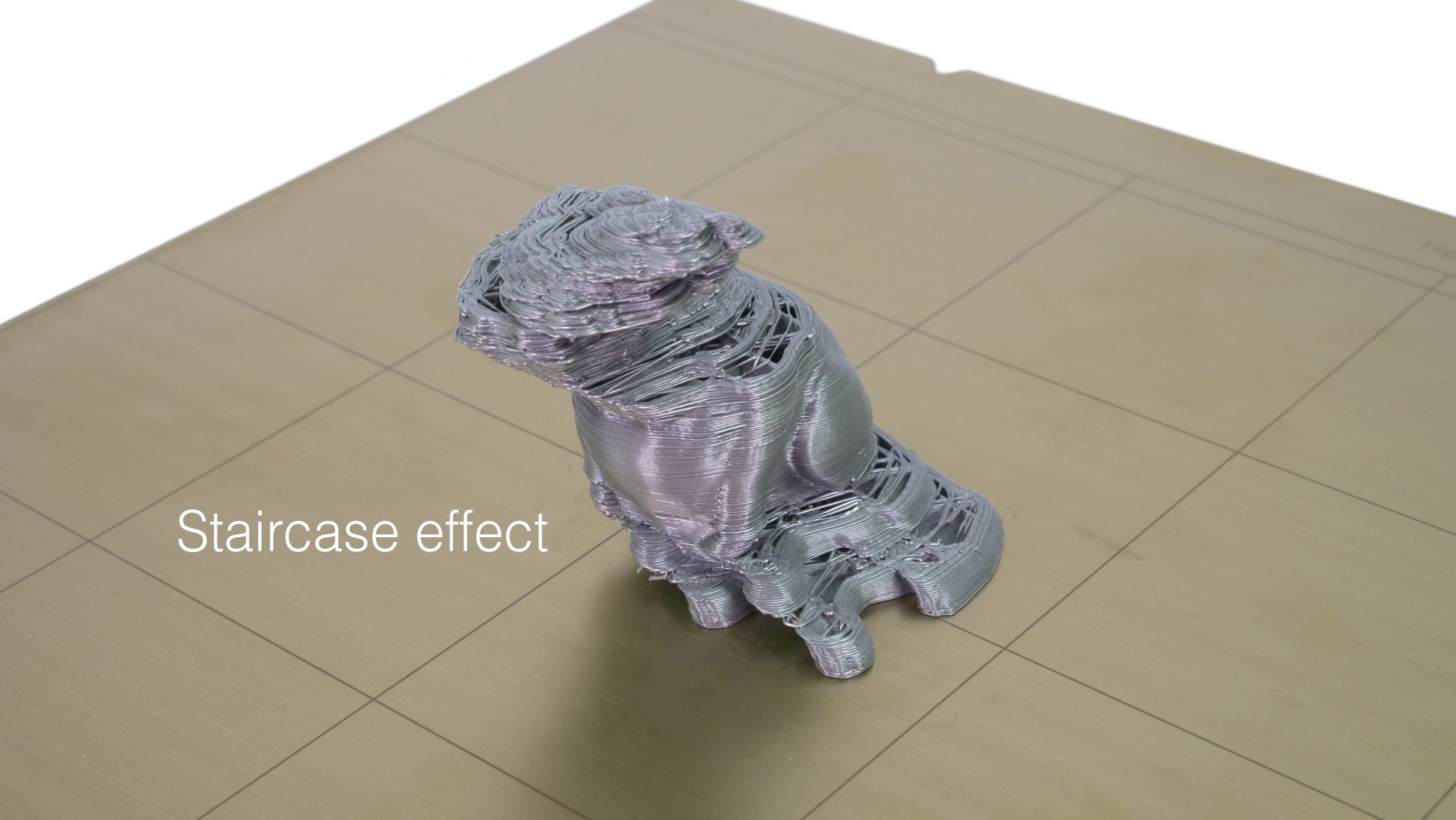 Run the printer in Normal mode rather than in the Stealth mode. You can change Power mode in the LCD Menu -> Settings -> Mode. The stealth mode is perfect for small and simple objects. For bigger or more complex prints, the Normal mode is recommended. Also, note that in Stealth mode, the Crash detection feature is not available.

Make sure the extruder and the heatbed can move freely

Make sure there are no obstructions in the path of the extruder or heatbed and their bearings. For example, there might be a piece of filament stuck around the belt (usually around the Y-axis pulley) from your previous prints. 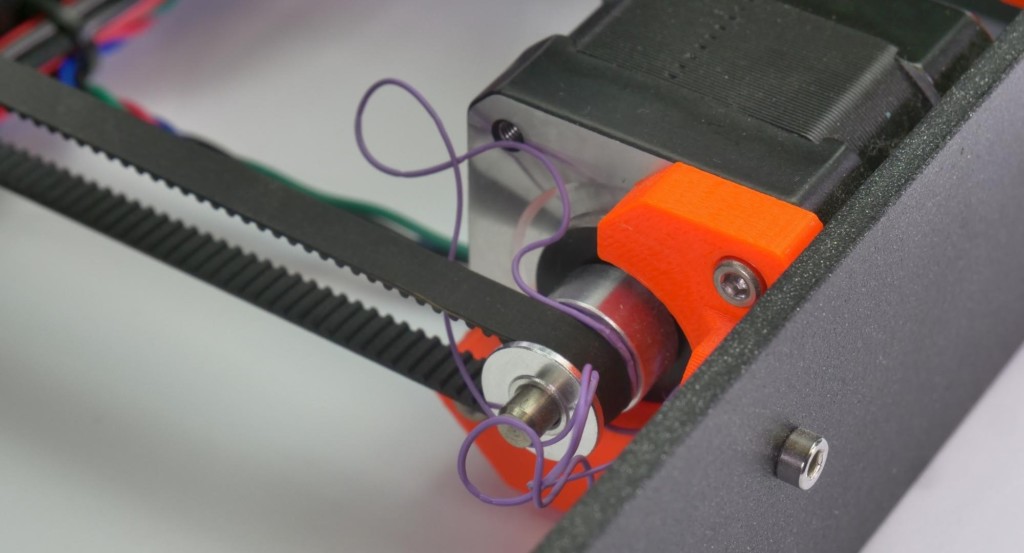 Another instance of obstruction is when the zip ties or another part of the extruder cable bundle are not arranged according to 5. E-axis assembly. If the cables hit the frame before the extruder assembly does (if it's an MK3) or before the X end-stop does (if it's an MK2/S or an MK2.5) the printer detects an inaccurate end position. See the photo below and make sure the cables are arranged accordingly. 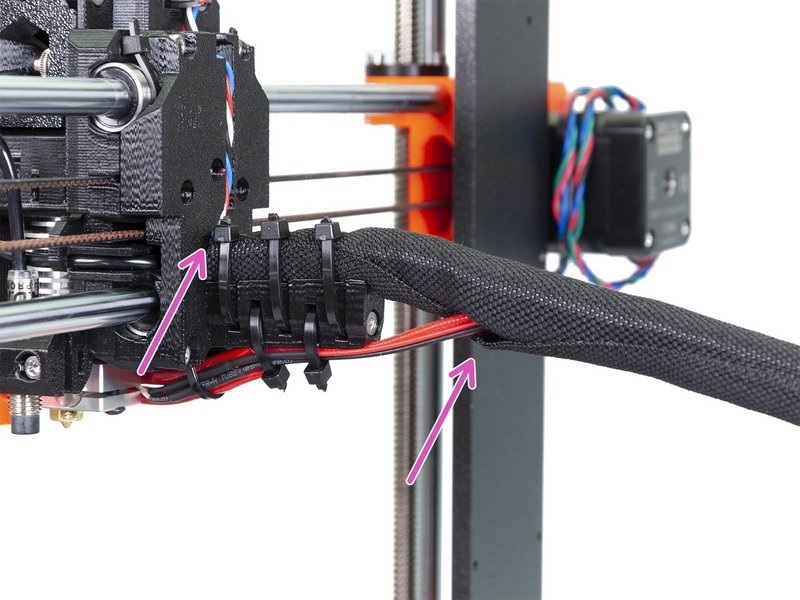 You can read more about in i3 Printer Regular Maintenance and this guide.

Also, verify if the smooth rods don't bear any deep scratches and if the bearings are properly lubricated. According to our testers, the best lubricant is a homogeneous, soft grease with lithium additives, such as the GLEIT-µ HF 400. Another good lubricant is the Mogul LV 2-EP. In general, Super-lube or any other multi-purpose grease will do as well. 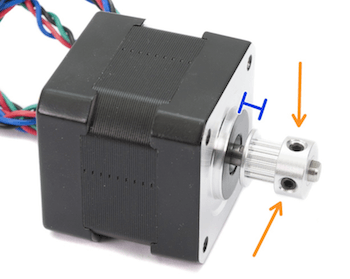 Both pulleys on both axes also have to be aligned, meaning the motor pulley has to be well centered and the belt has to be moving in a straight line, not traveling from right to left while the pulley is turning.

Check the tension of your belts

Check your belt-tension. If you have an MK3 or MK3S, check the Belt Status numbers via LCD menu -> Support -> Belt Status. The values should not be under 240 and above 300, but there is no single ideal value. The number does not represent any quantity.

The MK2.5S, MK2.5, and lower models do not have the belt status option. The clue we can give you is that the belt should sound roughly like a low bass string when plucked. It should be possible to pinch the two sides together with your thumb and index finger, but you should feel a little bit of resistance.

The plastic parts holding the belts can get loose over time.

Use the technique described in this step of the assembly manual to test if the pulley is correctly tightened and if the belt is not too loose. Hold the X-axis motor shaft with pliers (take advantage of the flat part of the shaft) and try to move with the extruder. The same procedure can be applied to test the Y-axis pulley and belt. 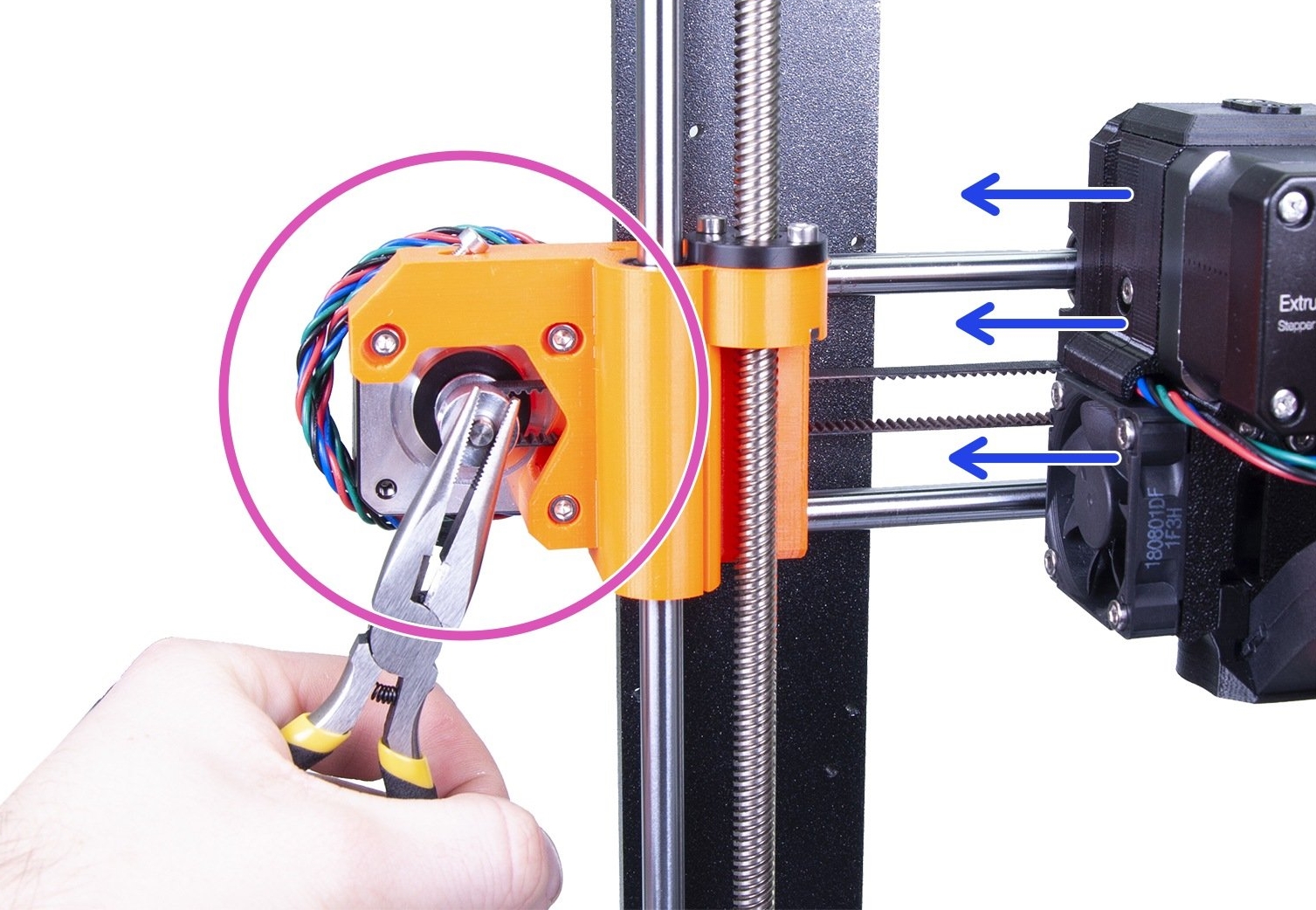 Objects with overhangs are generally harder to print. Some overhangs might even warp upwards during the print, and the nozzle might crash into them. The same can happen in some cases if you choose too small infill percentage when slicing the 3D model. To prevent printing overhangs, you can cut the object (check out our article on the Cut tool). You can also try to increase the print fan speed or increase the Z-hop distance in PrusaSlicer. Print fan speed is found in Filament settings -> Cooling and Z-hop distance in Printer Settings -> Extruder 1. 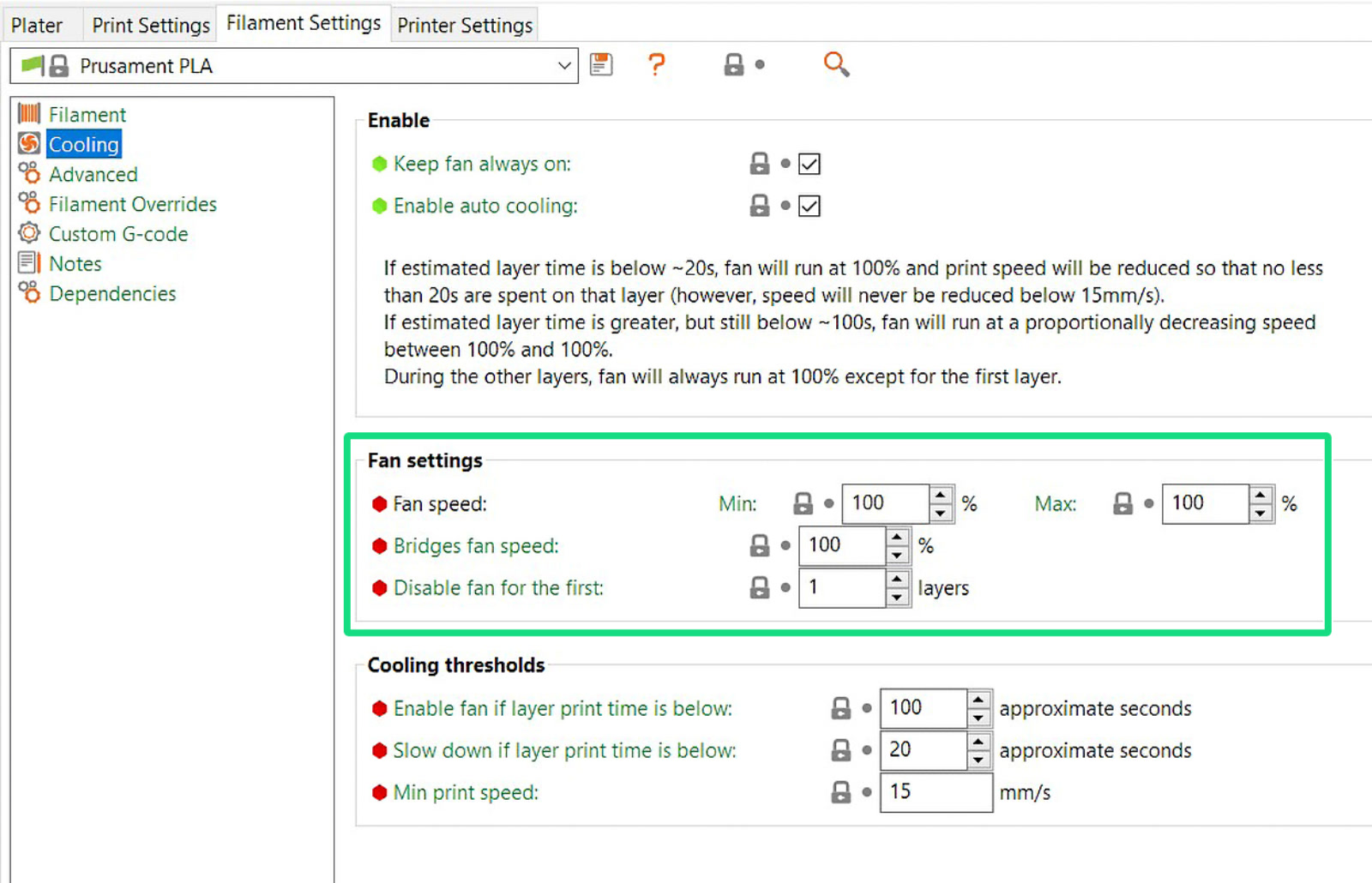 When printing large objects, it’s recommended to decrease the printing speed. During a print, go to LCD Menu -> Tune -> Speed and decrease the number.

Both pulleys on both axes also have to be aligned, meaning the motor pulley has to be well centered and the belt should be perfectly straight. Check whether the X-axis belt is not brushing against printed parts.

Make sure nothing is blocking the movement of your axis – Check for any obstructions in the path of the bearings or any possible waste from previous printings stuck around the belt (usually around the Y-axis pulley). 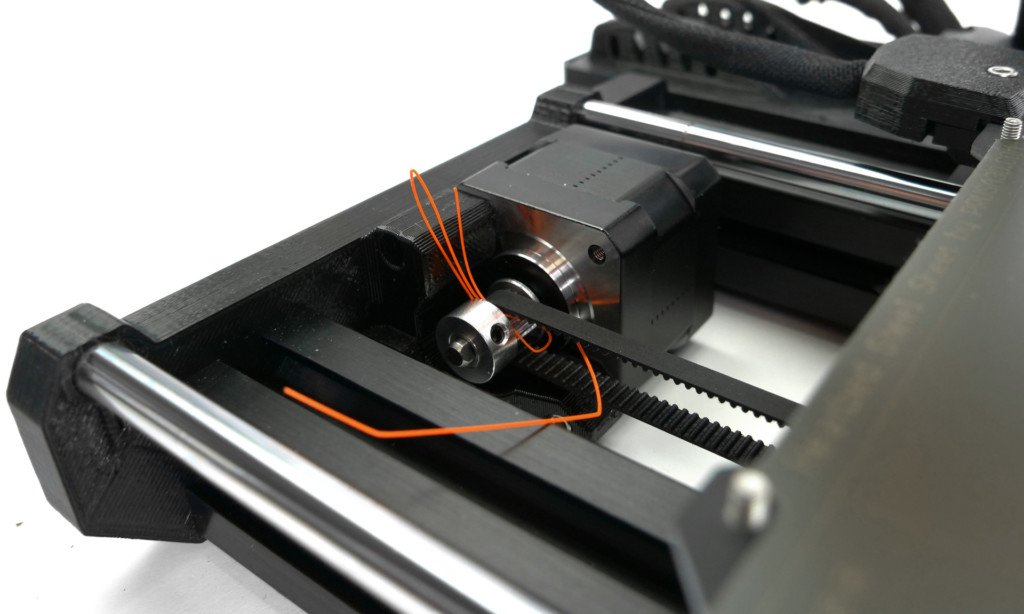 If the set-screw on the belt pulley has come loose or it was not secured on the flat side of the motor shaft, it can slip and may cause issues with the axis not moving perfectly in tandem with the motor's rotation.

The set-screw for the Y-axis is easily accessed, being under the bed, but the X-axis is a bit more tricky. You can access the set-screw for the X-axis through a hole on the top of the extruder (picture below). You will not be able to see if the set screw is aligned with the flat side of the motor-rod and tightening it will only be a temporary fix, but it is a great way of knowing if this is the issue and what needs to be disassembled.

If you only see shiny metal in the hole, you must rotate the motor to reveal the set-screw. Even it is loose, it will move a little with the rotation of the motor, revealing the screw. Access Settings -> Move Axis -> Move X, on the LCD-menu, and rotate the knob to spin the motor.

Free movement of the axis

Make sure the print head (the part moving along the X-axis) can move freely in the entire range. Especially the cable bundle attached to the extruder should not prevent the print head from reaching the end of the axis.

Also, verify if the smooth rods are not scratched and if the bearings are properly lubricated. According to our testers, the best lubricant is a homogeneous, soft grease with lithium additives, such as the GLEIT-µ HF 400. Another good lubricant is the Mogul LV 2-EP. In general, Super-lube or any other multi-purpose grease will do as well.

None of this solved the problem?