Menu
Relevant for:
MK2.5SMK3SMK3S+
Last updated a year ago
This article is also available in following languages:

The IR sensor is a hybrid solution that combines an IR laser sensor triggered by a tiny mechanical lever. This means that in case one of the functions of the IR sensor is not working, the source of the issue might not be the sensor itself.

Issues can appear as:

If you have to do some emergency prints before resolving the issue, you can always disable the filament sensor from LCD menu -> Settings -> Fil. Sensor [OFF].

There are two different versions of the firmware available, one for the S and S+ upgrade and one for the initial filament-sensor. Make sure you have the correct one. The new IR Filament sensor requires the S/S+ version of the firmware.

Having the incorrect firmware will often, but not always, cause it to fail calibration due to the different designs of the extruder parts.

The connector should be on the bottom row of pins, covering all pins, with the red wire on the right. See the picture below. The only correct orientation is depicted on the top-left.

The cables for MK3/S/+ and MK2.5/S IR filament sensors are different as they have different mainboards. On MK2.5/S the white wire is shifted one pin to the right. The picture below depicts the MK3/S/+ cable, but the position and orientation of the connector remain the same on the two models. 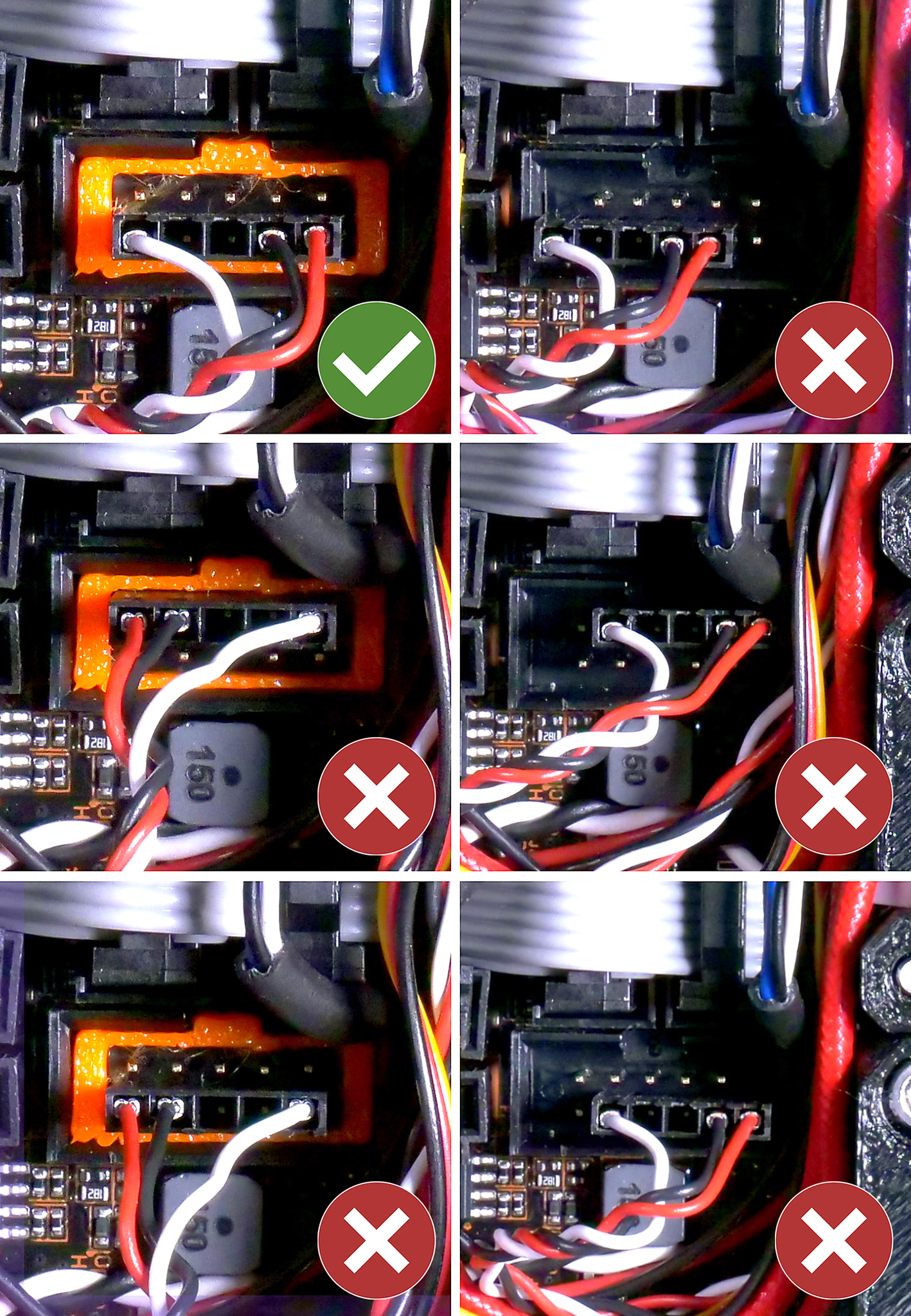 Assembly of the extruder

Before going into disassembly you should check some key parts of your extruder assembly. You may have overtightened some screws which can affect the tight tolerances used in the trigger mechanism.

There have been some reported issues when overtightening the screws pictured below. Navigate to LCD Menu -> Support -> Sensor info and see if the 'Fil. Sensor' value (1 or 0) when adjusted.

The FS lever is the part that is moved by the filament to activate the sensor. It is important that this moves as expected.

The IR sensor value should be a stable 0 when there is no filament and a stable 1 as long as the filament is present.

All in all, the lever has to move freely and get pushed by the steel ball in a regular manner.

After fixing this issue, assemble the extruder following 5. E-axis assembly you can also turn the Filament autoload back on. Re-do the Z calibration, it should not be necessary to re-do the entire XYZ Calibration, unless you have by mistake touched/moved with the P.I.N.D.A./SuperPINDA sensor.

Clean up of printed part

If all of the steps above do not solve your issue, and the IR sensor will continuously trigger, it may be necessary to do some clean-up of a printed part. The tolerances within the IR filament sensor mechanism are very tight. On some prints of revision R4/C4 of the extruder-motor-plate, it may be necessary to shave off a little bit of material to have the right clearance.

Using an Exacto knife, cut away the plastic ~0.5 mm deep around the edge, marked in the picture below (purple arrow and green measure). In essence, remove the steps from the layers in the round area where the Fs-lever triggers the sensor.

When the sensor is removed, you will see if the extruder-motor-plate is still interfering with the Fs-lever, moving it when placed back on.

An alternative is to remove a little bit of material on the FS-lever, but as it is already very small you can easily take off too much.
Was this article helpful?